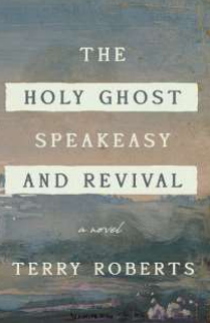 Jedidiah Robbins is a man on a crusade. From town to town, his Gospel train rides the rails of 1920s Appalachia, spreading the Good News with his daughter and a loyal group of roustabouts in tow. But Jedidiah’s traveling revival company has a secret: in addition to offering the gifts of the Holy Spirit, it also delivers spirits of another kind. Prohibition is in full swing, but The Sword of the Lord train keeps the speakeasies in the towns it visits in business by providing the best that mountain stills have to offer. While beyond the gaze of federal agents, the operation eventually runs afoul of an overzealous small-town sheriff and a corrupt judge, setting in motion a series of events that could land them all in chains. Told with haunting lyricism, this is the story of a preacher full of contradictions, a man for whom the way is never straight and narrow. It bends like the river, a river that leads him in the paths of a different brand of righteousness—and perhaps even to salvation.

This ballad of a novel is an affectionate account of a charismatic evangelist and his devoted team. Part Elmer Gantry, part confidence man with a heart of gold, Jedidiah Robbins delights and surprises us in this Prohibition era romp of romance and moonshine, as impossible to resist as a Doc Watson solo. Rev. Robbins is haunted by the past, confronts the KKK, and though all too human at times, displays a bedrock of spirituality, and even makes friends with the Grim Reaper, in this picaresque narrative of loyalty and love in the mountains of North Carolina.

In his latest novel, Terry Roberts has created an unforgettable character in Jedidiah Robbins, a reverend who delivers both sermons and whiskey to his followers, but his novel transcends mere satire to become much more. Ultimately, The Holy Ghost Speakeasy and Revival contemplates complex questions of faith and morality in a world ripe with hypocrisy. Terry Roberts is an immensely gifted writer and he gets better with each book. Bravo!

Ron Rash, author of Serena and The Risen

Once again, Terry Roberts skillfully explores the South to find answers from the King James Bible and jars of white lightning from mountain stills.

Elizabeth Spencer, author of Voice at the Back Door and Light in the Piazza

To order A Short Time to Stay Here or That Bright Land visit Amazon.com

And to watch a short video of author Terry Roberts sharing information on the storyline of The Holy Ghost Speakeasy and Revival, click here.